Naleczow is a spa in the picturesque neighbourhood of The National Park. The town is located in the South of Poland, 20 miles away from Lublin, the capital of voivodeship.

The 19th century owner of Naleczow planned it as a garden-town. This original state of Naleczow has been preserved untill the present day. The 50 acre Spa Park is the heart of Naleczow. The river Bohotniczanka flows through the Park, creating a small pond with an island, in the centre of the park. There are many old monuments in Naleczow - the most popular is Malachowski's Palace. One can quench thirst with a glass of Naleczowianka, country's most famous mineral water. Having visited the park one must take a stroll down Lipowa street to see beautiful, 100 year-old-villas.

While sitting on a porch of a cafe-bar, enjoying your coffee or tea and eating a chocolate covered prune, you can admire the beauty of the garden-town. Naleczow's charm was appreciated by many famous Polish writers and poets such as: Henryk Sienkiewicz (Nobel price winner), Boleslaw Prus, Stefan Zeromski, Stanislaw Witkiewicz, Jan Lechon, Ewa Szelburg-Zarembina, Kazimiera Illakowiczowna, as well as artists from abroad, such as a well known artist-painter Michal Elwiro Andriolli and many other famous people, who spent days or even years in this town.

The most valuable monument of the town is the Palace of the Malachowski family. It is situated at the end of Lipowa Street and is surrounded by a beautiful, old park. The architect, Ferdynand Nax, designed that one-storey building and covered it with a mansard roof, half-rounded at the front and decorated with Naleczow and Pilawa coats of arms. The palace is said to be built in years 1771-75 in baroque style. For Stanisla and Marianna from Potocki Malachowski family. During the II World War the palace was partially destroyed, but rebuilt soon after the war finished. The interior of the palace surprises with its lavishing rococo and late classicism furniture. The ball hall, as well as the adjacent rooms on the first floor is richly stucco-adorned.

Nowadays the palace hosts a museum ad memoriam Boleslaw Prus, where one can find many exhibits concerning the author's person. Nearby the palace there is a one-storey building called Oficyna Palacowa (Palace's offices) which used to be Galezowski's mansion, and which was built in the first half of the 17th century. 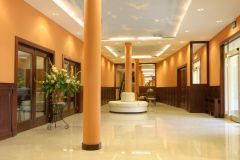 The park surrounding the palace was set up in the mid 17th century, and further extended in the following century to meet the needs of visitors coming to the spa. In the park area there are many health resort facilities located: the oldest spa facility, baths, Greek, English and Bishop's bungalows to name just a few. Within the park area there are also the monuments of Stefan Zeromski (designed and sculptured by A. Zurakowski in 1928) situated between the palace and the spa; and of Boleslaw Prus situated on the palace's grounds.

Along the Armatnia Gora street one can find some villas as old as the beginnings of the Health Care institute consisting of facilities named: Podgorze, Ukraina and Oktawia. On the top of the hill one can visit Chata where used to be Stefan Zeromski's working office and now a museum devoted to his person. The building was designed by Jan Koszczyc-Witkiewicz and built in 1906. Nearby the site there is also a museum devoted to Stefan Zeromski's son - Adam - who died there in 1918.